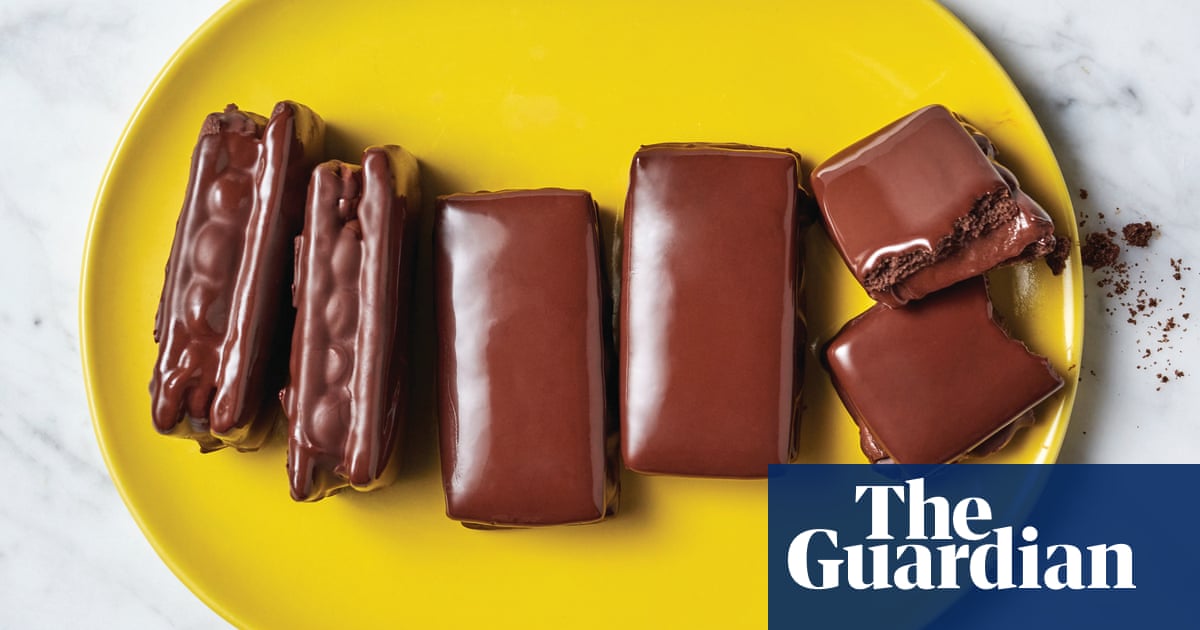 Show caption ‘Whose favourite biscuit isn’t a Tim Tam?’: the homemade variety by Morgan Hipworth, one of the baking recipes teens will love in his new book. Photograph: Penguin Random House
Australian food and drink

Since I was a kid, the kitchen’s always had an allure, and baking and cooking has played a massive part in my life. Excuse the bad pun but, for some reason, cooking lights an intense flame within me.

It’s the creativity of transforming basic ingredients into something exciting. It’s the way that food brings people together. It’s the colours. It’s the smells. Cooking takes me to some alternate reality where anything is possible, and I’m more myself.

My signature chocolate chip cookies can become your signature too!

Preheat the oven to 200C. Line a baking tray with baking paper.

In the bowl of a stand mixer fitted with a paddle attachment, combine the butter, brown sugar and caster sugar, and mix for two minutes or until the mixture is light and fluffy.

Use your hands to mix the dough – it should now be quite sticky – to make sure the chocolate chips are evenly distributed. Divide the dough evenly into 10 balls. Make sure to keep it loose, because the cookies should be light and airy. Place the cookies on the lined baking tray (don’t press them down), leaving at least 5cm between each cookie for them to spread. Top each cookie with a sprinkle of sea salt (optional) and bake for 15–18 minutes or until golden brown.

Remove from the oven, allow to cool on the tray for 10 minutes and then transfer to a wire rack to finish cooling. These cookies are best enjoyed the day you bake them, but you can keep any leftovers in an airtight container for up to two days.

When I first started to bake sweet treats, these brownies were requested everywhere I went. They’re perfect to make if you are running short on time, because they’re so simple – just throw everything in a bowl and mix, and 30 minutes later you’ve got the best gooey, chocolatey brownies ever.

‘These brownies were requested everywhere I went’: these gooey, chocolatey treats are quick and easy. Photograph: Penguin Random House

Preheat the oven to 180C and line a baking tray (preferably 18 x 25cm or similar) with baking paper.

In a large mixing bowl, crack the eggs and whisk until they are pale and fluffy. Add the remaining brownie ingredients except for the icing sugar, and mix with a wooden spoon until everything is just combined. Make sure you don’t over-mix the batter, because this will cause tough, dry brownies – and we want the opposite!

Pour the brownie mixture into your baking tray, using your spoon to spread it evenly and press down into the corners to ensure the whole tray is covered, then bake for 30–35 minutes or until the middle is just wobbly. (You can check by pressing a fork – or your finger – against it.)

Remove from the oven and allow to cool completely, then dust with icing sugar to serve if you like a little extra sweetness.

Whose favourite biscuit isn’t a Tim Tam? Here is my take on this classic.

In a bowl of a stand mixer fitted with a paddle attachment, mix the butter, brown sugar and caster sugar for three minutes, then add the eggs and mix for a further five minutes until the mixture looks smooth, pale and fluffy. Add the plain flour, cornflour, bicarb soda and cocoa powder, and mix until just combined.

Press the dough out into a disc (this will make it easier to roll out later), wrap in a tea towel and refrigerate for at least one hour or ideally overnight.

Preheat the oven to 180C. Line a baking tray with baking paper.

Place the dough between two sheets of baking paper and roll out into a 5mm-thick sheet. Remove the paper, and cut the dough into four 8cm rectangles, and place on your baking tray. Bake for 10–12 minutes, then transfer to a wire rack and allow the biscuits to cool completely.

With the mixer running on low speed, slowly pour in the milk and continue mixing for two minutes or until the mixture is well combined, scraping down the sides as needed. Transfer the mixture to a piping bag fitted with a 1cm nozzle.

Hipworth’s Made by Morgan: 60 epic recipes is available now through Penguin

To make the chocolate topping, combine the chocolate and coconut oil in a bowl over a double boiler, and stir continuously until you have a smooth mixture. (Alternatively, you can melt the mixture in the microwave, stirring in 30-second intervals, until it is smooth.)

To assemble, pipe the buttercream filling on to a biscuit and place another biscuit on top to create a ‘sandwich’. Over a wire rack, spoon over the chocolate topping over the top and sides and allow to set.

We will be in touch to remind you to contribute. Look out for a message in your inbox in . If you have any questions about contributing, please contact us.