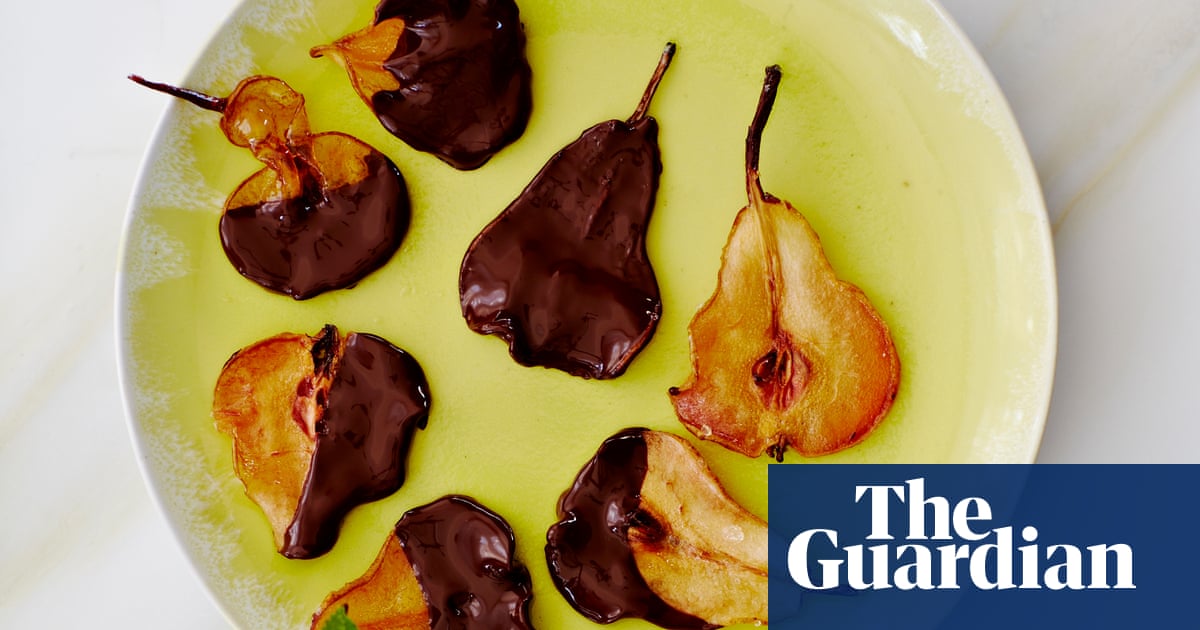 Pears come into their own when cooked – in both sweet and savoury dishes. Here’s how to make the most of this season’s harvest

It is pear season, not that you would know it from looking at my garden. I planted a pear tree some years ago, and in all that time it has produced a grand total of one pear. If you’re luckier than me – or want to go to a fruit shop – this is the time to put your pears to good use. While raw pears often seem to be either inedibly hard or unmanageably squidgy, cooked pears are a different matter entirely. Here are 10 dishes you can make with pears. As for me, maybe next year.

The most sensible thing to do with a pear is poach it. Luckily, Felicity Cloake knows exactly how to do that. Her perfect poached pears are as advertised – silky, lightly spiced and cooked in a bottle of wine. The result, as Cloake says, is “soft and yielding, with an intense, almost banana-like sweetness”. Master this and the rest of these will be a doddle.

Now that the mornings are noticeably colder, you have no excuse not to incorporate warm pears into breakfast. Anna Jones has a recipe for maple syrup pears and porridge that is staggeringly quick to put together. Pop your porridge on in one pan and, in the other, heat some sliced pears in a tablespoon of syrup. The sweetness of the pears balances perfectly with the oats – an ideal start to any autumn day.

It’s always worth remembering that, while they lend themselves most obviously to desserts, there are plenty of savoury things you can do with pears as well. For example, Georgina Hartley uses hers to make pulled pork shoulder with roasted pear gravy. The recipe requires a lot of time, but is mostly hands off. Once the pork is seared, you just dump everything into a casserole dish – pears included – and five hours later you have a fragrant, but not too sweet, sauce.

Mackerel with pear and red onion

For something faster and lighter, Nigel Slater’s mackerel with pear and red onion hits the spot. The bulk of the dish consists of grilled mackerel fillets, but it is accompanied by a dressing that blasts it into the stratosphere. The onions are cooked briefly in red wine vinegar, their sharpness counteracted by the sweetness of chopped pear. The result is phenomenal.

While we’re on the subject, let’s leave some space for Simon Hopkinson’s roquefort, pear and chicory salad with walnut oil. It couldn’t be easier to assemble – chicory leaves, sliced pear, crumbled cheese, a glug of oil and some pepper – but the mix of tastes and textures is perfect. Plus, it is as pretty as a picture, too.

Right, that’s dinner sorted. Now back to the fun stuff. The inestimable Dan Lepard has a recipe for pear fritters that is nothing short of ingenious. The batter is made with cooked rice, of all things, which lends heft to what could be quite a slight dessert. Dredged with orange sugar at the end, these fritters are a thing to behold.

If you’re after something cakier, Dinner at the Zoo’s pear custard tart is well worth your time. It couldn’t be easier to make: slice some pears, make a custard, tip the custard over the pears and cook it. A bit of cinnamon sugar at the end and you have got a pudding that, quite frankly, I would like to eat now please.

Slightly more complicated, but no less worthy, is Kylee Newton’s recipe for chocolate and pickled pear frangipane tart. It goes through a lot of stages – pickle the pears, make the pastry, chill the pastry, cook the pastry, make the frangipane, slice the pears, bake, leave to cool – but look at the thing! It’s a piece of art.

If somebody offered me a plate of pear crisps, there’s a good chance that I would pout about it until they went to a shop for Pringles. However, I will make an exception for Claire Ptak’s version, because they are ostentatiously luxurious. The trick is that they aren’t really crisps; they are slices of pear candied in sugar syrup and then dunked into melted chocolate. Don’t pretend you wouldn’t wolf these down.

Finally, ice-cream. I had always assumed that pear was too subtle a flavour to stand its ground in an ice-cream, but Diana Henry’s roast pear and sherry ice-cream appears to get round this by using an absolutely whopping number of pears. These are baked with sugar and sherry for half an hour, then pureed and stirred through custard before freezing. A belting pudding, especially served with a poached pear.

We will be in touch to remind you to contribute. Look out for a message in your inbox in . If you have any questions about contributing, please contact us.