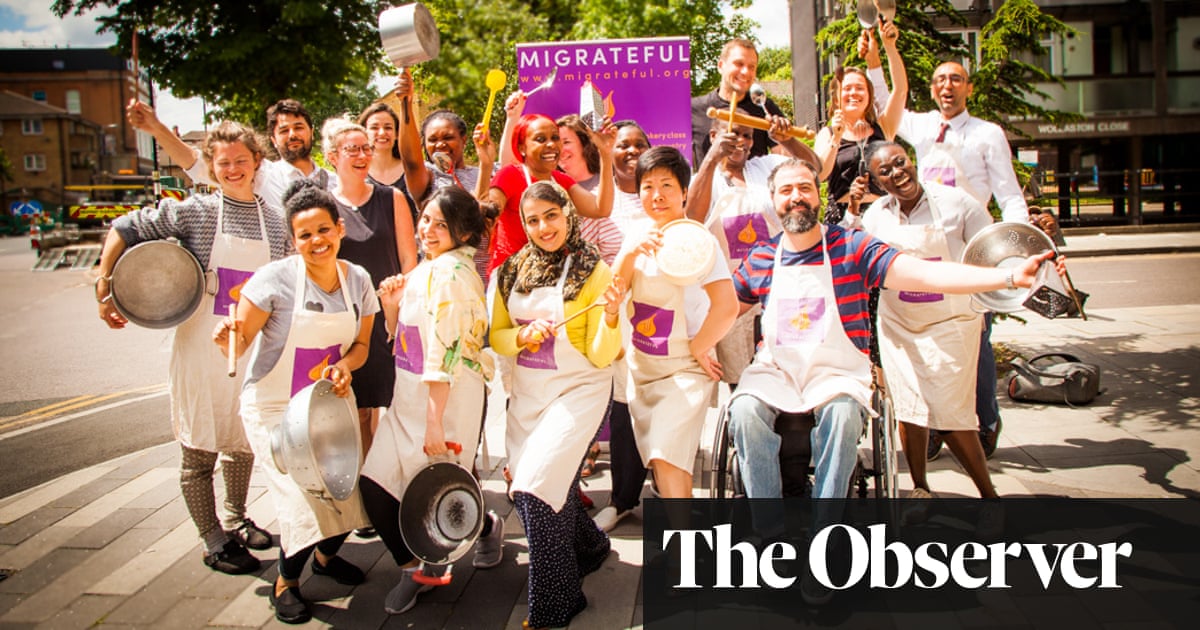 Thanks to £200,000 of crowdfunding, the Migrateful charity, which helps migrants get on their feet, now has a permanent base in London

For cookery school teacher Elizabeth Kolawole-Johnson, there is almost nothing more rewarding than seeing people cooking her mother’s recipes.

“When people taste the food and they’re so appreciative of it, I don’t know how to even quantify that feeling. It’s a great feeling,” she said.

Kolawole-Johnson came to the UK from Nigeria to live with her family, but over a period of eight years ended up becoming an undocumented migrant, living in fear of being arrested and sent back to a place she no longer called home.

Though she had a successful career and has a master’s degree in psychology, she was not allowed to work, instead filling her time volunteering. It was through this she found Migrateful, a cooking charity staffed by refugees and other vulnerable migrants, which next month is opening a new £200,000 cookery school, thanks to a successful crowdfunding campaign.

The campaign attracted 800 backers, which included £45,000 from Sadiq Khan, the mayor of London, and met its target in just a month.

The Migrateful cookery school, which teaches classes on more than 20 different cuisines, has transformed the front room of the Peel community centre in Clerkenwell into a bespoke venue with an open-plan kitchen. It has 12 cooking stations where participants will receive one-to-one cooking guidance from a chef cooking their family recipes, which might be Albanian, Nepalese, Syrian or Cameroonian, for example. Overlooking the modern space is a pair of glass doors that open out to a herb garden.

It is a world away from the empty restaurants Migrateful has been using for classes, and it means staff no longer have to move equipment around by taxi or risk getting lost on the way to new places in London.

Jess Thompson, the founder of Migrateful, said: “It will be amazing because we’ve never had our own space. We’ve always relied on other venues, which has its own set of complications. And I think also for the people that we support, having that place that they feel a real sense of belonging in is going to be really amazing.”

Many of the refugee chefs have escaped war-torn countries or sex trafficking. Though Migrateful works with all genders, most of the chefs are women. Thompson said: “There’s higher unemployment among female refugees because they often come from countries where the culture is that the woman stays in the home. So, often, the husband will be able to speak English but the woman wouldn’t have had that educational opportunity, and also women are generally more confident with cooking.”

The customers tend to be mostly young professionals who want to help refugees and who like cooking, but the charity also receives lots of bookings for corporate events.

Thompson said: “That’s where we see a slightly different demographic because it will be, for example, the office manager that would book us as the team-building activity for, like, an all-white, IT consultancy company. Maybe those people wouldn’t have naturally chosen to come to a class, but then they find themselves having a really good time.”

These meals are not well known in the UK, even among foodies, and Kolawole-Johnson said being coached through the process made people more confident to cook them at home after the two and a half hour class.

“Even the best-written recipes sometimes, if you have to do it by yourself, can be quite scary. It could take a very brave person to actually try it. So the opportunity to see someone cook it, and then you’re doing it alongside them, that kind of makes people bolder to try it out by themselves when they get home,” she said.

Now legally allowed to stay in the country, Kolawole-Johnson has left volunteering to work for the charity, managing the chefs and providing emotional and practical support.

When she found Migrateful she had lost confidence in herself and felt hopeless, which she often recognises in those who come to the charity for help.

“I suffered for lack of information for about seven years. The fear of deportation, that stigma of being illegal, that was always so oppressive and it would cripple you from doing anything at all.

When the chefs feel confident with their English and their ability to teach cooking, Migrateful helps them to make their own living. Thompson said: “Once they get their right to work, that’s a big moment of celebration for everyone. And then they’ll start to be able to run big catering events, they’ll continue to teach the cookery classes and the idea is that we’re supporting them to open their own food business if they want to.”

She added: “They feel very inspired by how much everyone loves their food, so food is the way that they feel they can build their livelihood in the UK.”

Customers picking up tips at an Argentinian cookery class given by the charity. Photograph: Migrateful Cookery School

We will be in touch to remind you to contribute. Look out for a message in your inbox in November 2021. If you have any questions about contributing, please contact us.